To minimise exposure to pathogens, you need to distance yourself as far as possible from the flush. If you’re a shepherd caught short, you’re somewhat better prepared...


...possessing as you do the skills for hooking a crook at arm’s length. Substitute in your mind sheep’s neck for toilet handle and you’ve the means of activating the flush remotely. ‘I’m going to shepherd the flock’ might work as a euphemism for the act of defaecation, but in practice shepherding is strictly limited in urban environments. Except perhaps in the case of citizens who have been awarded the ‘Freedom of the City’. Until this day, the medieval system of granting an esteemed person the keys to the gates of a walled town and hence the freedom of the city, gives that person the right to drive sheep and cattle across London Bridge. 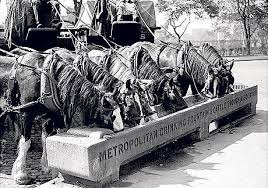 But even for the Freeman of the City, there are other microbial obstacles to hurdle that are often overlooked. Washing your hands or your crook in soap and water is advisable as attested to by the signs ‘Now wash your hands’ (that could also include ‘Now wash your crook’), but those tap handles have been touched by your contaminated hands and those of others before you. Channel your inner Howard Hughes and use an antiseptic towel to turn off the tap. And keep hold of it when you activate the hand dryer button. Quite literally, you don’t want the sh*t to hit the fan.

But even then it’s still not over. As many as 19 in 20 toilet attendees do not wash their hands properly. And they’re onto the next thing, which is the entrance door to the Gents or the Ladies. Their germs are all over the handle like a rash. Before they’re all over you as an actual rash.

Here though is where we can learn from the foot-and-mouth crisis that has historically blighted British agriculture. Footbaths of disinfectant were placed at the threshold of farmyards preventing further infection to sheep and cattle. After you’ve grappled with the toilet door handle, you’re festering again. Slosh your hands in an agricultural footbath situated outside the toilet door and you’ve thwarted those microbes at every turn. We’re looking too at a post-Brexit success story in the making. Never mind the prospect of Airbus, the international pioneer in the aerospace industry, pulling its massive investment in the UK. Here’s a chance for the Metropolitan Drinking Fountain and Cattle Trough Association to revitalise, the company that manufactured stone watering facilities in Victorian times for livestock travelling through urban areas. Repurposed, these are the footbaths, nay ‘handbaths’, forming that last line of defence against microbes.

Department stores are another victim of a changing economic landscape. And closing down entails job cuts. But it needn’t render obsolete the perfume counter assistant’s job. Entering the department store from street level, we are greeted by cosmetics brand representatives and their winning marketing jolliness, eager to squirt us with their latest scent. A slight change of setting and they could as easily patrol the outside of public toilets.

‘Anti-faecal spray, sir?’ they could offer.

Or perhaps a choice of anti-faecal scents?

‘Like to try a sample, madam?’ they could ask… though ‘sample’ with regard to excrement does conjure up rather unsavoury connotations.