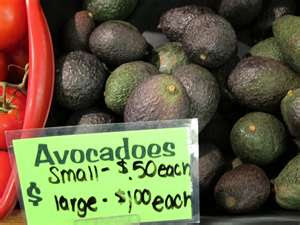 We prod avocado pears to gauge whether they are ripe or not. Or we do if we know what we’re doing around avocadoes. A slight squishiness is what we’re after, just the right side of a squelch. But often the hope far outweighs the expectation. We may end up prodding every one of a supermarket pile of breeze-block hard unripened pears hoping that one will yield. And well one might, if and only if, you are the 20th prodder to perform the ritual, by which time one may have been softened up enough to give the impression that it is ripe. The avocado is much like celery – you put more energy into getting it into your stomach than you get out of it. (Apparently somebody found that eating squirrels will also leave you wanting more (if you liked the first one) – probably somebody who survived on something more than squirrel (else he wouldn’t have lived to tell the tale), on what we might term a ‘squirrel-supplemented diet’.) (CLICK ON 'Read more' LINK, BELOW)

The avocado was first introduced to the West at ‘small gatherings’, which is middle-class speak for a drink at somebody’s house where you’re not supposed to invite any psychotic drunks. This was some time in the 1990s where the avocado was sporting itself in guacamole. A hostess might leave the guacamole in a bowl next to some Doritos and entreat members of the gathering to try it by saying ‘Dips?’ in a slightly high-pitched tone; or take the bowl to members asking ‘Nibbles?’
Posted by Paul Angliss at 22:15