Potential going unheeded happens a lot in human society. But there have been some notable trailblazers. Peter Stringfellow could see that ladies with big knockers would struggle to make it in areas of work such as deep sea diving. 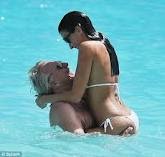 ‘By ‘eck, you’ll never sink with those buoyancy floats, loove’, he would say compassionately, and ‘What are you like swinging round a pole?’
‘You mean like being a fireman?’ the top-heavy interviewee would reply.
‘Like being a fireman. Aye. They need to ‘ave big chests an’ all.’ (CLICK ON 'Read more' LINK, BELOW)

Peter Stringfellow didn’t write those ladies off – he saw some potential. He saw the good in inept lady deep sea divers.
Similarly, Steve Jobs, the man behind Apple computers was written off early on in life because he was dyslexic. Traditionally, dyslexics were used for writing signs for greengrocers, like ‘Tomato’s’. But Jobs started up a fledgling computer business called ‘Apel’ which he later spell-checked and the rest is history. Steve Jobs succeeded despite his dyslexia and became the legendary creator of the iPod, the iPad, the iPhone and the iMac. A fitting epitaph might be: ‘Steve Jobs iRP’.
Posted by Paul Angliss at 23:11