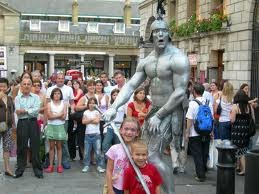 The decorating jumper elevates a man in the eyes of the rest of mankind as a DIYer. It says I have an owner who has a go at being self-sufficient. Not in the same league as television survivalist, Ray Mears, who could knock you up a meal out of detritus, like a moss sandwich, but a dab-hand all the same at doing handy things like painting the skirting board… and asking down the hardware store for rawl plugs and knowing what they are. The decorating jumper says this is a man who had the foresight and wherewithal to limit the disposal of age-flawed pullovers, to collect them in a clothes drawer for this eventuality. (CLICK ON 'Read more' LINK, BELOW)

That’s as far as the kudos goes, though, with the DIY apparel. See how far you get trying to negotiate a trade price at a hardware store dressed in a decorating jumper. To be taken seriously as a tradesman you have to have overalls. Unless your trade is that of the ferret-down-the-trousers practitioner, in which case you might prefer to wear something equating to ‘underalls’.
Older Irish construction site labourers in the 1970s used to work dressed in suits and distinguish themselves on the evening rush-hour buses home as the only city gents covered in concrete. Which makes you wonder about those people you see all of a sudden, these days, making money by pretending to be statues in town shopping centres with a little whistle in their mouths. Until, that is, you overhear one of those performers on the way home talking to a fellow bus passenger. ‘I go down the town centre of a Saturday and masquerade as one of those silver fellers. Scares the bejesus outta the kids. They love it, so they do’. It’s become a means of supplementing a pension.
Posted by Paul Angliss at 00:27