Fire Drills and the Hitler Moustache 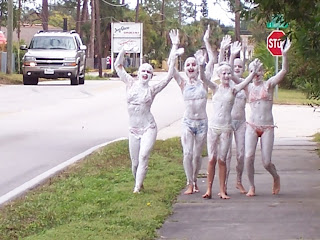 It has long been a fear of the author to be mistaken accidentally for a Nazi having been forced to break off from shaving in response to a fire alarm and gather outside his residence with the other tenants from his building. It’s a relatively niche phobia, but it stems from my shaving routine which is to shave the ‘handles’ first before moving onto the bit under the nose (a process that could be technically termed ‘filtrum depilation’). Dropping everything at that point in time would result therefore in the sporting of an inadvertent Hitler moustache. (CLICK ON 'Read more' LINK, BELOW)

If anything else, it does make you think on the conspiracy theory side of things. Did Hitler actually meet his maker in that bunker in Berlin in 1945? Of course, what could have happened is that some common or garden Nazi, not actually Adolf, was doing a bit of hunkering down the bunker business of his own. ‘Berlin’s falling’, he thinks, although he’s underground so how he would know that is anyone’s guess. Perhaps stuff is falling down into his bunker or he just got into conversation with another Nazi who had previously spent some time in the falling down bits at ground level. They could be talking and he says to our Nazi ‘I really hate other races’ and then mentions the Brandenburg Gates looking out of shape. ‘Berlin’s falling’, thinks our Nazi again (this time more informed), ‘but that doesn’t mean that we have to relax on the male grooming’.
Off he goes for a shave. He gets so far, but the bunker starts getting overrun with Soviet troops. The game’s up. And what’s to say he didn’t cop out like Hitler was supposed to have? – shooting himself while his bird chose the cyanide snifter route? And what’s to say she didn’t bear more than a little resemblance to Eva Braun? After all, those Nazis all look the same to me.
Posted by Paul Angliss at 00:55