Wrestling With Your Conch Shells 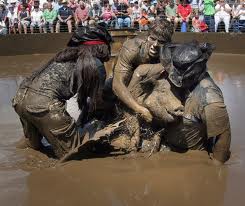 Animal bullying is supposed not to be allowed. The decision was meant to put a stop to things like bear baiting, kangaroo boxing, cow tipping, teasing slugs, sticking a Chinese burn on a vole and tapping a shrew on the shoulder then turning round when it looks round like you too hadn’t a clue who had done it. (CLICK ON 'Read more' LINK, BELOW)

There is though a loophole. Pretending when you joined the World Wildlife Fund that you thought you had signed up with the World Wrestling Federation. The organisations share the acronym ‘WWF’. This allows you to protest your innocence if, for instance, you were caught out performing wrestling moves on already endangered fauna. Like putting a zebu in a half Nelson or pin-falling a stoat. ‘Sorry, mate,’ you can say, ‘Thought I was acting charitably.’
Animal bullying can never really be banned. Whenever you try to ban anything, it’s said, you just succeed in driving it underground. And that’s bad news for moles, say, wanting to avoid a dig in the ribs.
Posted by Paul Angliss at 21:50