Sex Pests at the Zoo

Zoos have opened themselves up to opportunistic perverts. Unwittingly, we assume. Take a look at the photo (below) and we see how voyeurs can claim that they mistook the women’s toilet for another exhibit. 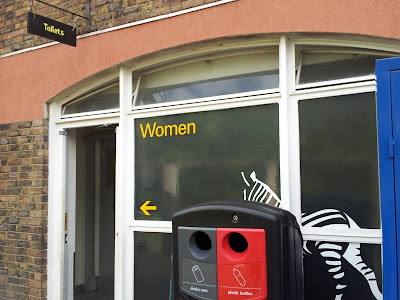 “I saw signs on all the animal enclosures telling us what they were… ‘gibbons’ it said on the gibbon cage,” and so on, the pervert will say in his defence.
“By the time I got to the women’s, I naturally thought a pattern was emerging. It’s confusing,” they will plead.
“Didn’t you notice that the women were peeing in there?” their accusers will ask.
“I did,” they will reply, “for over half an hour, until a keeper chucked me out for what was an honest mistake.”
“An honest mistake? You took three reels of film in there.”
“I was being honest – I could have said I only used two.”
The peeping Toms have another ploy that can help their defence. They can make up one of those cage labels you find, the regions of the animal’s natural habitat represented by black blobs on a map of the world. They could plant one they’ve knocked up outside the ladies’ loos, a world map completely blacked in, perhaps with the exception of one tiny white spot in southern Europe where women don’t have a habitation – Vatican City. There you are they will say, the outbuilding looked for all the world like a bona fide animal penitentiary.
So, how do you identify and incriminate your zoo perv? Most you would expect to weed out going on the mackintosh and milk bottle bins look, but it’s easy enough to blend in if they simply don the green sweatshirts and shorts the keepers all wear.
‘I’m a tour guide,’ they might say should you approach a suspect.
‘Quite clearly you’re not.’
‘How dare you. I’m wearing the keepers’ uniform.’
‘True, but the other keepers aren’t wearing their shorts round their ankles.’
Behaviour can be a give-away. It’s one thing them saying they’re tour guides but demonstrating how the monkeys entertain themselves is quite another.
Posted by Paul Angliss at 23:03