Witness this, a common scene in the Mexican cantina – a man suddenly convulses and spews his food all over the terracotta tiling.
‘Jesus! Jesus! What’s wrong?’ asks his concerned wife.
‘Que?’ asks the man.
‘What’s wrong? – ‘que pasa?’ in our language… well the Spanish language. What happened with our indigenous Aztec language?’
‘That’s another issue, Conchita. Let’s deal with this one first. Waiter? Waiter, take these beans away! They’re undercooked. Tastes like they’ve only been fried once.’
The Mexicans kicked off re-using things with their refried beans. They won’t go anywhere near them if they’ve been fried only once. 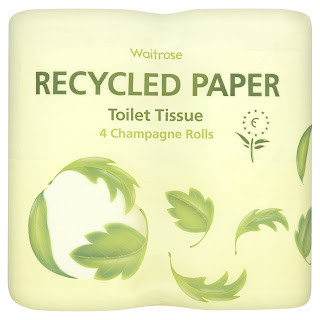 Just recently we reached the final frontier of recycling. Supermarkets now stock ‘100% recycled toilet tissue’. An unsavoury thought at first, using someone else’s discarded bog roll. But there’s always some of those reasonably salvageable sheets that people finish off with which aren’t so bad, the bits they use to make doubly sure, just to reassure themselves that there isn’t any more brown to be mustered. Look to recycle from the lavvies of certain personality types, like those averse to risk-taking and you’re retrieving a decent number of perfectly reusable sheets. And then there’s those long rolls you tear to drape over public toilet seats to avoid coming into contact with other people’s sweaty arses. It’s uncertain why some people have sweaty arses but it’s quite evident when one does from the frosted condensation you sometimes see on the toilet seat enamel.

Of course the 100% recycled toilet tissue people do all the recycling and repackaging for you. So, be aware when travelling in certain countries abroad where the product might not be available, that you know what you're doing if you decide to do-it-yourself. In those countries, where the toilets don't flush very well, you are requested to put your used bog roll in a little plastic swing bin next to the bowl. Don't mistake this for the dispenser.
Posted by Paul Angliss at 22:52